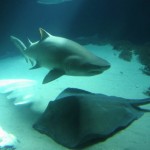 Here is a list of Aquarium exhibits that have live webcams at various locations around the world.

This is where you will find LARGE aquariums containing Sharks, Dolphins, Killer Whales, Sea Turtles and other saltwater and freshwater creatures like that.

If you’re looking for smaller aquariums such as goldfish, please see our Home Aquarium category.

The Dallas World Aquarium has two webcams.  Watch manatees and a deep water ocean cam where you can see giant Japanese spider crabs and other strange sea creatures.  Visit the DWA Webcams.

The Waikiki Aquarium has a nice animal cam where you can see Black Tipped Sharks as well as Jacks, Rays, Snappers and Groupers.  The sharks are fed three days a week – on Tuesdays, Thursdays and Saturdays, so check back often and perhaps you’ll see a feeding frenzy!  The web cam image updates approximately every three seconds.  Watch the Waikiki Aquarium Webcam.

Here is a live aquarium cam located somewhere in Japan that shows a very wide variety of sea life including sharks, rays and who knows how many types of fish. This is a remote control aquarium cam but seems to have limited control, so you may only be able to move it a little. Since this is in Japan, this may be dark after about noon in the U.S., so if it is, check back late at night to watch or early in the morning.  Watch the Aquarium Cam in Japan.

Catch a rare glimpse of Beluga Whales on this web cam coming from the Vancouver Aquarium. The aquarium is home to five Beluga Whales. They can perform tricks and even turn their heads and alter their facial expressions!  You can also watch Sea Otters on a separate cam you can find on this site.

This live video feed is available during Vancouver daylight hours. If it is dark, that is simply because it is currently dark in Vancouver. You can view this video directly from your browser.  Watch the webcams at Vancouver Aquarium.